“Science has been deleted from the Paris Agreement!”

Variations of this headline dominated the coverage of SB50 negotiations in Bonn.

The idea began early in the week when Saudi Arabia raised procedural concerns with the agenda item relating to the IPCC Special Report on 1.5, which was published in October last year.

The Saudis said that the topic should be discussed under an existing agenda item, not a new stand-alone agenda item. After some back-and-forth, the SBSTA chair proposed that Parties have a “substantive” exchange of views on the topic, and conclude the agenda item at that session in Bonn. Everyone agreed.

But then the headlines came.

Before going any further it must be said for the avoidance of confusion that the Kingdom has spent many years and millions of dollars undermining the climate science of the IPCC, and making sure negotiations in the UNFCCC do not set ambitious mitigation goals.

This is unsurprising for a country whose economy is wholly based on oil. They are trying to buy time.

But for many complex reasons they have been made into the sole villain of a long-running play with an abundance of villains, including some truly evil geniuses.

For example, the United States had in fact opposed the actual IPCC Special Report back in October…

And again, along with Saudi, Kuwait, and Russia, in Poland last December…

Yet this time around it was only Saudi who grabbed the headlines.

Very little of the coverage explored the reasoning behind some of the statements. Thankfully Third World Network does that, and reports what exactly was said by whom, so you can judge for yourself.

An unfortunate reality that has been caught up in the “science denialism” is the fact that there are in fact gaps in the IPCC reports.  The IPCC readily acknowledges this. It is not a controversial statement, nor should stating it serve to undermine the basic findings of the IPCC.

In fact, science, and in particular climate science, is always political. From the selection of authors, to decisions about what qualifies as acceptable literature to peer-review, to the negotiation of the summary for policymakers, the entire process – like any aspect of life – is political. The IPCC is not immune from assumptions which are anything but neutral, including assumptions built in to the models about how much we will have to rely on certain unproven technologies…

None of this changes the fact that the IPCC is the best available science.

What’s not clear is that a failure to enthusiastically welcome IPCC under the relative insignificance of a stand-alone SBSTA conclusion actually… matters.

It’d be nice, but what matters more is what countries do. Is their NDC in line with what the IPCC says is required to remain below 1.5 agrees warming?

Is the money that rich countries are putting on the table commensurate with the financial needs of poorer countries to deliver their NDCs?

It is interesting that there was not so much coverage of stories about how rich countries conspired to delete references to conflicts of interest, or how peddlers of false solutions kept forcing their free-market ideology down our throats. And we have to ask why were these issues trumped by procedural bickering about a report which has already been written, and its negotiated summary widely circulated.

Or why the headline for every single news outlet was not this: 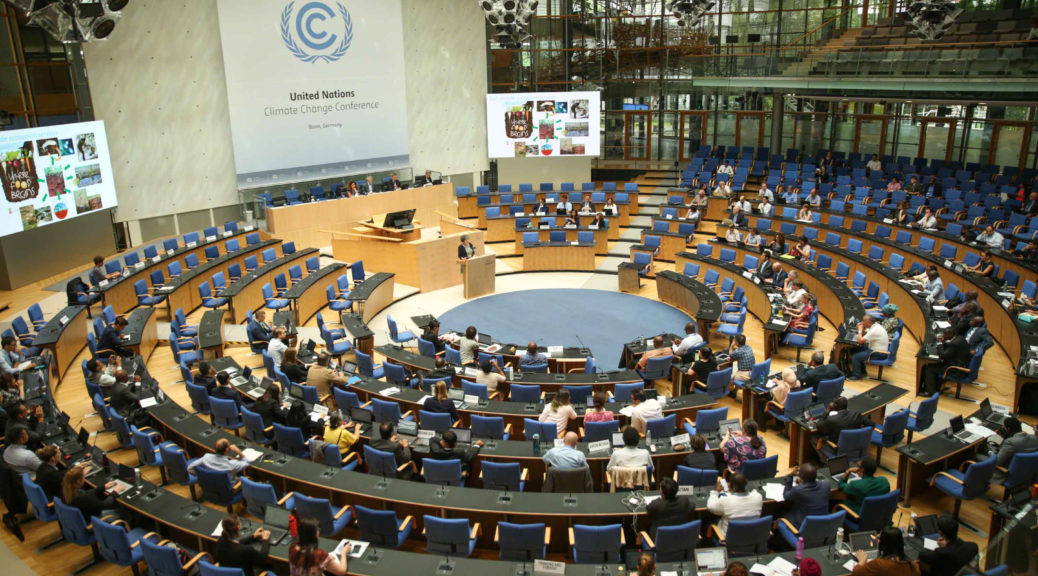 Some of the issues being discussed here in Bonn are outlined here in the ever-excellent Third World Network’s curtain raiser.

Or, if you’re really nerdy, you can read the “reflections note” by the chair of one of the negotiation track.

The ins and outs of the negotiations, which sometimes take several days to even adopt their agendas, can be followed in more detail via the Third World Network updates or the Earth Negotiations Bulletins or of course, on our twitter.

From a climate justice perspective, we have the same, as yet unmet, demands and overriding priorities in Bonn as we did in Katowice before the rulebook was agreed.

As the negotiations progress we will agitate for: a conflict of interest policy to prevent corporations from weakening the rules; support for countries that are hit by climate impacts to rebuild and pick up the pieces after disasters; and measures to prevent countries from exploiting loopholes to carry on polluting while pretending to be “neutral” through offsets.

As the world hurtles ever faster towards complete ecological breakdown, international climate change negotiations resume this week in Bonn, Germany, and members of the Global Campaign to Demand Climate Justice are here to do what they do best: demand climate justice.

A bit of background…

After 3 years of negotiations, countries finally agreed to a set of (almost) comprehensive guidelines to implement the Paris Agreement during the COP24 session, held last December in Katowice, Poland.

Trying to make sense of #COP24? This is how #climatejustice spokespeople have reacted: https://t.co/HNPdegk8tD— Demand Climate Justice (@gcdcj) December 15, 2018

The United Nations Framework Convention on Climate Change (UNFCCC) sets the bar for what climate action looks like globally, nationally, and in many ways locally. Holding governments to account in this process hinges on demands being delivered back “home”.

Thankfully a burgeoning global climate justice movement is beginning to bring together various strategies of articulating and realising alternative visions for the world, electoral politics, and targeting the corporate polluters by exposing their financial support, their social license, their infrastructure, and their political connections.

However, even though most of the Paris Rulebook is complete, there is still a lot of detail to work on in the negotiations and a long way to go before actions match rhetoric.

This session – SB50 – marks 25 years of meetings of the subsidiary bodies to the UNFCCC and the start of the post-Paris process of ratcheting up the national targets. At this session parties will consult on what will be a political outcome to increase ambition. 2019 – 2020 is a critical period for countries to focus on ratcheting up their existing climate action plans to deliver the scale of climate action needed – through international finance, technology transfer, and capacity building on an unprecedented scale to enable all countries to reduce emissions to zero as quickly as possible, with richer countries taking the lead on emissions cuts in the region of 80-90% by 2030.

The next step is the UN Secretary General Climate Action Summit in New York in September, where only countries who put forward more ambitious national plans are invited to speak. Will this be an empty stage? Given that ambition can be defined as action on adaptation, and on increased support for action in other countries, there is plenty of scope for countries to turn up in September with increased ambition, in all its forms, including actions that are conditional on support being given.

At COP25 in Chile this December there will be a final effort to take stock of climate action being done in the pre-2020 period. Developed countries have ignored this critical period since 2012, when they agreed the Doha Amendment to the Kyoto Protocol, which obliged them to make aggregate emission cuts that would be at least 18 per cent below 1990 levels. The Doha Amendment has not come into effect due to a failure by many developed countries to ratify it in their national parliaments.

In Chile countries are expected to arrive at a political outcome to enhance their pledges under the Paris Agreement (pledges which only apply after 2030).

Next, at the COP in 2020, countries must deliver long-term (2050) low greenhouse gas emission development strategies, as well as new and enhanced national pledges that are in line with the science for a pathway to 1.5C. This means the emissions reductions, adaptation, and support pledged must put us on a trajectory to zero emissions, well before 2050, and with richer countries completely phasing out all fossil fuels by the 2030s.